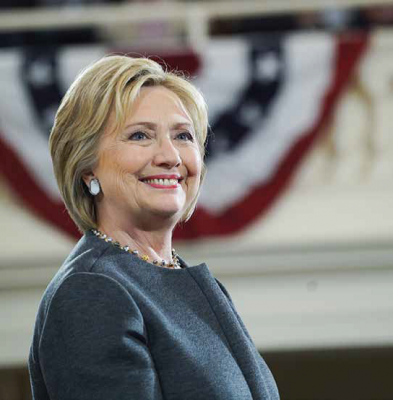 A LatinTRENDS Exclusive interview with Hillary Clinton…up close and personal.

Originally published in the June 2016 issue of LatinTRENDS Magazine

The early predictions were wrong. There was no Hillary Clinton coronation. She is the presumptive Democratic nominee, but only after a very long battle. Her competitor, Vermont Senator Bernie Sanders, a self-described democratic socialist, galvanized millions of Americans to display their anti-establishment anger. His movement was young, made up of many college students and millennials who, by the way, make up almost half of Latino eligible voters this year. They are as much anti-Iraq War and anti-Wall Street as they are pro-Transparency.

That’s a headache for Clinton.

She is the establishment candidate with support from seasoned party elders. Her vote for the Iraq invasion still haunts Democratic doves. And Clinton has lucrative links to Wall Street. She was paid $225,000 to speak for just a couple of hours at Goldman Sachs, and collected speaking fees worth about $21.6 million in about two years, according to a CNN analysis. Clinton is also dogged by the email investigation. During her tenure as U.S. Secretary of State, Hillary Clinton used her private email server for official communications, instead of the government server. Those communications included thousands of emails that would later be marked classified. As the FBI continues an investigation, the State Department issued a scathing report scolding Clinton.

Obstacles notwithstanding, Hillary Clinton is on her way to victory. She has at least 2,178 delegates to 1,810 delegates for Sanders. It takes 2,383 delegates to win the nomination. But the Democrats include 712 “superdelegates,” usually party leaders, whose votes at the convention are not bound to a candidate based on the primary’s popular vote. Including superdelegate support, Clinton’s lead jumps over the threshold to 2,768 compared to Sanders at 1,866. Because superdelegates can change their support before the convention in July, Sanders says he will campaign until then. Our Q&A with Secretary Clinton focuses on social issues like HIV, voter engagement and living standards around Latin America rather than the issues stated above that we hear so much about in mainstream media.

LT: Secretary Clinton, what is the biggest problem facing Latinos in our country and how would address it?

HC: The top challenge facing Latino families in this country today, like all Americans, is getting incomes rising. They need a raise and I am committed to creating good-paying jobs and increasing the minimum wage. We also need to ensure that women are paid equally for their work—which is not the case today. This pay disparity is even worse for Latinas, who earn just 55 cents for every dollar earned by a white man. I am also committed to ensuring that all families have access to quality affordable childcare and health care. Another barrier that holds back Latinos is our broken immigration system. We need comprehensive immigration reform.

LT: We rarely talk about Latin America’s poor living standards when we discuss immigration. People would stay in their countries if life was better there. What would you do differently to support those economies?

HC: No region is more important to our long-term prosperity and security than Latin America. We should be harnessing the power of our proximity for a new era of partnership, not building walls. As Secretary of State, I forged partnerships to combat the effects of climate change, crime and expand opportunity across the region, especially for women and girls. Congress should fully fund President Obama’s request for $1 billion in assistance for Central America.

LT:You’ve said that you’ve learned how serious the problem of substance abuse is, and that you will take it on. What will you do?

HC: We should ensure that everyone suffering from addiction can obtain the ongoing treatment they need. I have proposed a $10 billion initiative to combat this deadly epidemic to help expand services. We cannot effectively address this issue without also undertaking criminal justice reforms. We should prioritize rehabilitation and treatment over prison for low-level and nonviolent drug offenses.

LT: HIV rates in the Latino community are high. What is your plan to support the search for a cure?

HC: In the United States only one third of patients diagnosed with HIV remain in regular care and are prescribed antiretroviral therapy. African Americans and Latinos are disproportionately impacted by HIV/AIDS. Most people can live live long, healthy lives with HIV if they are diagnosed and get consistent treatment. I will increase access to affordable health care, address pharmaceutical expenses for people with HIV/AIDS, expand the utilization of HIV prevention medications, and increase our investment in HIV/AIDS research. We must also prevent exposure. I will also increase our investment in medications, like Pre-exposure prophylaxis (PrEP).

LT:Many Latinos who are eligible to vote, don’t. How do you change that?

HC: We should be making it easier to vote, not harder. I have called for universal, automatic voter registration at age 18 and at least 20 days of early, in-person voting across the country. Another way to encourage more participation in our democracy through voting is to promote naturalization. There are millions of people in this country who are eligible to become citizens, but who do not go through the naturalization process. I have committed to addressing barriers to naturalization, including by expanding fee waivers for example. I will also establish a new Office of Immigrant Affairs in the White House. These policies will help immigrants access the integration services they need.

LT: Puerto Rico is struggling economically. How will you support the island as president?

HC: I’ve been calling on Congress for months to give Puerto Rico authority to restructure its debt while respecting Puerto Rico’s local self-government. As President, I will partner with Puerto Rico. I will fight for high-quality health care for Puerto Ricans and will urge Congress to put Puerto Rico on a path toward equal treatment on health care by increasing the share of Medicaid paid for by the federal government and stopping cuts to Medicare.

LT:You are a grandmother. Many of my Anglo friends hire nannies who speak Spanish to their children. Do you prefer to see your grandchildren learn Spanish as toddlers? Or wait until they’re older?

HC: Chelsea and Marc have already started to teach Charlotte Spanish, and I think it’s fantastic. It is absolutely critical that children hear as many words as possible before they turn 3 because that’s when 80 percent of a child’s brain is formed. I love hearing Charlotte already be able to count to ten or point to and name things in both Spanish and English.

See for more of this story in this month’s issue of LatinTRENDS Magazine.

Subscribe to our e-Newsletter for your weekly updates on events, restaurants, trends & news:  http://bit.ly/1BcjOjX

Tiesto Brings John Legend with him to Santo Domingo in ‘Summer Nights’ Video
CHIPOTLE IS INTO BURGERS NOW
Translate »
%d bloggers like this: