Diego Luna is “The One That Got Away” from Katy Perry!

Diego Luna is “The One That Got Away” from Katy Perry! 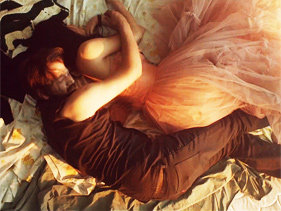 By Zuleyka Indarte
Diego Luna stars in Katy Perry’s recently released music video as the singer’s moody yet passionate artistic love interest who dies tragically in a motorcycle accident. The video, a far stretch from Perry’s usual colorful and upbeat party clips, portrays the artist as an old woman reminiscing over her lost love through a series of flashblacks.
Luna came to prominence in America’s movie industry after starring in the critically acclaimed comedy, Y Tu Mamá Tambien (2001), as  Tenoch Iturbide. He began his acting career at a young age, starring in a multitude of Spanish telenovelas, and slowly made his way into American film. After his performance in the 2001 comedy, Luna began to build a place for himself in English films, starring  Frida (2002) and the Harvey Milk biopic Milk (2008). Alongside childhood friend Gael Garcia Bernal, Luna owns and runs Canana Productions. The company, which recently merged with Golden Phoenix Productions, produces television documentaries regarding the unsolved murders of women in the Mexican city of Juarez.
Luna will be starring in the upcoming Spanish-language American comedy film Casa de mi Padre alongside Will Ferrell. The film is expected to be released in March 2012.
Thanks to Perry’s video, Luna can now add dreamy and artistic motorcyclist to his growing resume.