These Latina YouTubers Are Making More Money Than You

These Latina YouTubers Are Making More Money Than You

Well these females, along with others that are also experiencing success in the vlogging world (video + blog = vlog) are making tons of money producing do it yourself videos, makeup and beauty segments and cooking tutorials.

According to the marketing and media news website AdAge, who calculated an estimation on how much the top YouTube channels earn with data by Outrigger Media during the month of March, illustrate that these beauty and cooking bloggers make thousands of dollars per month and most likely make thousands more with sponsorships and advertising. 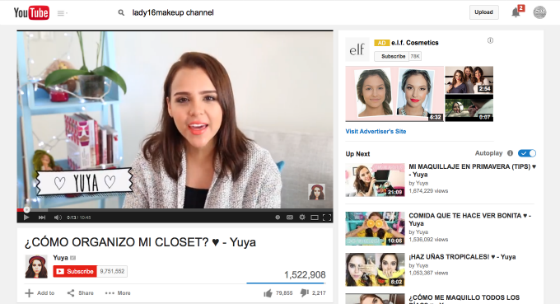 Bethany Mota’s channel, Macbarbie07, received more than 13 million views. The Californian teenager, who likes to be called Beth (que Americana) shares hair, makeup, fashion, DIY “and basically anything I love”. Awe, que cute. Bethany, I mean… Beth earned way more than I ever did in the month of March with $15,781.95. But I’m not bitter.

The channel, CadenaTres Vida Y Hogar, is a Spanish-speaking television station that broadcast on channel 28 and publishes its content on YouTube. That’s smart, because their cooking shows, horoscope readings and sex advise gets thousands of views online. In March alone they’ve received more than 9 million and earned $41,474.50. Many Muñoz, the television-cooking expert helps bring in those views on YouTube with her delicious Spanish dishes.

The credit goes to these women for turning their passion into a fulltime job. And yes, it’s a fulltime job that involves lots of hard work. Creating a successful brand while producing entertaining, inspiring and informative videos (even if it’s with an iPhone) to thousands of viewers every day or week isn’t easy. But these vloggers are doing it and doing it very well.