Dania Ramirez is Pregnant With Twins!

Dania Ramirez is Pregnant With Twins! 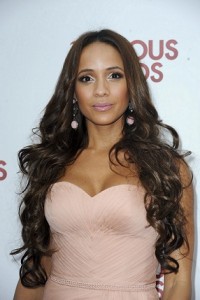 Devious Maids star Dania Ramirez announced her pregnancy by posting an image of her sonogram on Instagram. Next to the image she wrote: ‘I am proud 2 Announce our 2 NEW BUNDLES OF JOY! Yes, I’m having TWINS!’ She jokingly added, “And No They Do not Belong 2 Mr. Spence. Lol! 13-5-22.” (Mr. Spence is the man her character Rosie Falta works for on Lifetime’s Devious Maids.)

Ramirez and director Bev Land got engaged in September 2011 and married on February 16, 2013 in her native Dominican Republic. This is the first pregnancy for Ramirez, while Land has an 11-year-old son Kai from a previous relationship with actress Sharon Leal.

The 33-year-old actress previously revealed she had an instant attraction to Bev, saying: “The love of my life found me! That’s how he would say it anyway since he claims he was attracted to my energy before I even turned around. The moment I turned around, he casually asked me and our mutual friend to join him for lunch and once we started talking I knew I could talk to him forever and we haven’t stopped talking since! And, the fact that he’s ubersmart and has the most amazing son in the world, there was no doubt I was totally in.”

Ramirez’s Hollywood credits include movies Premium Rush and American Reunion and has appeared on hit shows like Entourage, Heroes and The Sopranos.

3 Tips for Finding True Love Any Time of the Year

What You Didn’t Know about Charlie Sheen