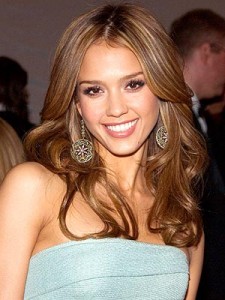 Jessica Marie Alba (born April 28, 1981) is an American television and film actress. She began her television and movie appearances at age 13 in Camp Nowhere and The Secret World of Alex Mack (1994). Alba rose to prominence as the lead actress in the television series Dark Angel (2000–2002). Alba later appeared in various films including Honey (2003), Sin City (2005), Fantastic Four (2005), Into the Blue (2005), Fantastic Four: Rise of the Silver Surfer and Good Luck Chuck both in 2007.

Alba was born in Pomona, California[1] to Mark Alba and Catherine (née Jensen). Her mother is of Danish and French Canadian descent and her father is Mexican American, though both of his parents were born in California (on the December 1, 2009 episode of Lopez Tonight, George Lopez announced that a DNA test showed Alba to be 87% European and 13% Indigenous American). She has a younger brother, Joshua. Her father’s Air Force career took the family to Biloxi, Mississippi, and Del Rio, Texas before settling back in California when she was nine years old. Alba described her family as being a “very conservative family—a traditional, Catholic, Latin American family” and herself as very liberal; she says she had identified herself as a “feminist” as early as age five.

Alba met Cash Warren, son of actor Michael Warren, while making Fantastic Four in 2004. On December 27, 2007, Alba and Warren announced that they were engaged. Alba married Warren in Los Angeles on Monday, May 19, 2008. On June 7, 2008, Alba gave birth to a baby girl, Honor Marie Warren, at Cedars-Sinai Medical Center in Los Angeles, California.[