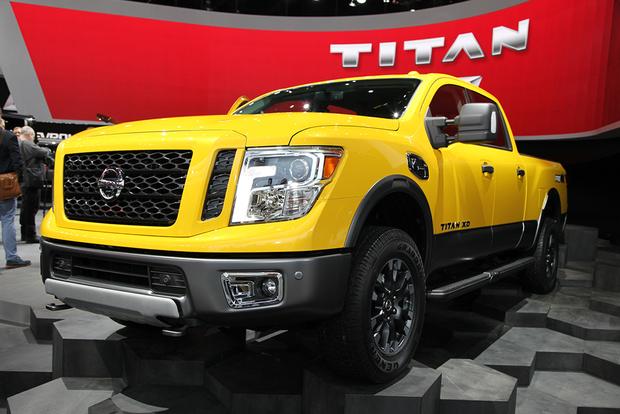 What happens when the older kids don’t let you play with their friends? You build your own toys and make new friends, which is what Nissan did. Nissan is expecting to get a lot of new friends now that they’ve introduced their new toy, the Titan.

Nissan – the well-established Japanese automaker – has challenged the domestic auto brands by creating a revolutionary lightweight pick-up truck with a diesel option. What?!! Yes, I said diesel! Plus, this newly redesigned truck is bigger, stronger and has more luxury than it previously had in the past 11-years.

The Titan, created entirely in the United States – designed in California, engineered in Michigan and built in Mississippi with engines from Tennessee (gasoline) and Indiana (Cummins diesel) – is being introduced as American tough.

Thanks to Nissan’s invitation to the North American International Auto Show in Detroit I was able to witness the warrior like exterior and elegant interior with leather trimmings first hand. The excitement (from auto enthusiasts) and concerns (from representatives of other auto brands) at the event was evident.

According to Nissan’s CEO Carlos Gohns the Titan is not only trying to topple other pick-up brands from the coveted number one spot, but they are also looking to create a new genre of pick-up trucks.

Many in the Latino community use pick-up trucks for their very tough blue-collar work that requires heavy lifting and shipping of materials and goods. In fact, the cities with the largest truck market (Dallas, Houston and Los Angeles for example) are highly populated by Hispanics.

In 2013 Chrysler’s Ram 1500 was named “Truck of Texas” in a state where the Hispanic buying power is evident. That’s because in 2012 Chrysler created a campaign, “A Todo, Con Todo” (the phrase: ‘Give It Your All’), to win over the Hispanic buyers… and it worked.

If Nissan continues to promote Titan’s amazing abilities, power and rugged beauty – specifically to the Hispanic community in the United States (which I know that they are) – Nissan might takeover the pick-up truck market as “best new class”.